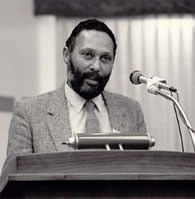 [. . .] The people versus the power-bloc: this, rather than "class-against-class", is the central line of contradiction around which the terrain of culture is polarized. Popular culture, especially, is organized around the contradiction: the popular forces versus the power-bloc. This gives to the terrain of cultural struggle its own kind of specificity. But the term "popular", and even more, the collective subject to which it must refer -- "the people" -- is highly problematic. It is made problematic by, say, the ability of Mrs Thatcher to pronounce a sentence like, "We have to limit the power of the trade unions because this is what the people want." That suggests to me that just as there is no fixed content in the category of "popular culture", so there is no fixed subject to attach to it -- "the people". "The people are not always back there, where they have always been, their culture untouched, their liberties and their instincts intact, still struggling on against the Norman yoke or whatever: as if we can "discover" them and bring them back on stage, they will always stand up in the right appointed place and be counted. The capacity to constitute classes and individuals as a popular force -- that is the nature of political and cultural struggle: to make the divided classes and the separate peoples -- divided and separated by culture as much as by other factors -- into a popular-democratic cultural force.

[. . .] Popular culture is one of the sites where this struggle for and against a culture of the powerful is engaged: it is the stake to be one or lost in that struggle. It is the arena of consent and resistance. It is partly where hegemony arises, and where it is secured. It is not a sphere where socialism, a socialist culture -- already fully formed -- might be simply "expressed". But it is one of the places where socialism might be constituted. That is why "popular culture" matters. Otherwise, to tell you the truth, I don't give a damn about it.


A serious house on serious earth it is,
In whose blent air all our compulsions meet,
Are recognised, and robed as destinies.
And that much never can be obsolete,
Since someone will forever be surprising
A hunger in himself to be more serious,
And gravitating with it to this ground,
Which, he once heard, was proper to grow wise in,
If only that so many dead lie round.

some are more relevant than others